Test Your Might.  Excellent.  Kano, Liu Kang, Rayden, Johnny Cage, Scorpion, Sub Zero, Sonja…. MORTAL KOMBAT!  Ever since I saw Liu Kang’s sweet moves and flowing locks, I’ve wanted to be transported to Outworld.  Just kidding, that would be weird.  BUT, before I went to Ayutthaya, I did some research and found out that this is where the 1995 masterpiece, Mortal Kombat, was filmed. 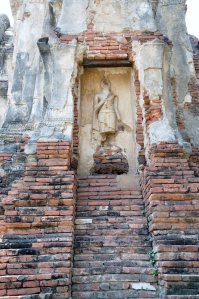 A: According to US history classes, history of white people is all that matters.  Except for the Ancient Egyptians, because they built cool shit and The Rock used to be their scorpion king.

B: Ayutthaya was destroyed by the Burmese in the late 1700’s and subsequently abandoned.  All that’s left are stone ruins of palaces and temples.

It’s only about an hour from Bangkok, so on one of my precious days off, my friend Bom and I got in a van for $2 and headed out of town.  When we got there, we hired a rocket ship/tuk tuk to take us around for the day.

The town has been repopulated, but the ruins were declared a UNESCO world heritage site so they have been largely preserved.  Although, you could easily still climb all over them if you wanted to.  The modern town is interesting because since the former city was so large, the modern buildings co-exist with the ancient ones.  We’d be driving down the street and a business would be built next to the ruins of a small temple.  The more expansive temple/palace sites had larger “grounds” surrounding them though. 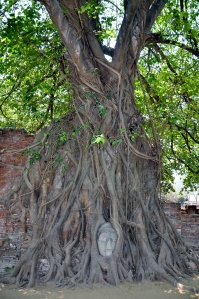 At one of the temples, there is a Buddha head that is slowly being swallowed by the roots of a large tree.  I imagine that if I go back to Ayutthaya someday, I probably won’t see it again.  That tree is hungry for Buddha.  There is also a huge reclining Buddha statue draped in an orange cloth.  He’s real sleepy.

How dare he show me the bottoms of his feet. Rude.

After checking out the ruins, we went to a floating market.  They had a theater there where actors portrayed the brutal sack of the city by the Burmese.  I mean, the attack was unquestionably terrible.  Innocent people were killed, raped and enslaved, but as an outsider, the play was the one of the best examples of propaganda I’ve ever seen.  They must have taken lessons from American war movie producers.

I hope that elephant tramples you.

One thing that really pissed me off was the ivory section.  Because of the time I spent with Meg in Cameroon, I’ve read a fair amount about how their elephants are being slaughtered so that ivory can be sold in Asian markets.  But this was the first time I’d actually seen it and it really shocked me.  I was just gawking and the sales people were saying to me “real, real, special price for you”.  In a very un-Thai like way, I gave them my best scowl and just said “This is awful.  So bad.”

After trolling the market and “zoo” for a little while, we decided to head back home.  To complete the full cultural experience, we sat in traffic for over 3 hours.  The ancient Ayutthayans probably could have walked back to Bangkok faster.