Since I’ve been here, a lot of people have asked me about the food.  Probably because most of my friends are American and we are the best at thinking about and eating food.  In fact, 65% of us are true professionals according to the CDC.  Here’s what I know so far: everything I have eaten has been delicious.

I want to give special attention to fruits because there are so many of them, and they are all so delicious and cheap.  For example, I bought these pineapples yesterday for 7 Baht each, 60 cents total, for 3.  There are street vendors selling all kinds of fruits pretty much everywhere you go.  You can buy them whole (as I do sometimes and bring them home) or they will cut them up for you if you want to eat them with a stick while you walk.  One of my favorites is dragon fruit (above).  I had only ever had the white flesh one until I got here.  A funny thing about the wine colored dragon fruit, it dyes your pee blood red.  After I put the pieces together and realized that my kidneys weren’t shutting down, it became a funny story.

Fruit takes many forms here.  Thai’s don’t really do Thai desert, but they have this stuff called Mango Sticky Rice which is amazing.  It’s exactly what it sounds like, sliced up mango and white sticky rice covered in coconut milk and sugar.  My students always say, “Teacher! you get the most fat if you eat!”.  I say, bring it on.  Then they stare at me, clueless, because that expression is not in their book.  Thirsty?  No problem, some street vendors stand there all day and hand press fruits into juices; oranges, pomagranates, guava, coconut etc.  The fruits of their labor are so delicious and cost me 20 cents.  Som Tam is a salad made from unripened green papaya, chilies, fish sauce and sugar.  Papaya is tangy when it’s not ripe, so this actually turns out to be really spicy and savory, not sweet.  Apparently the working women especially enjoy it because it doesn’t make them fat. 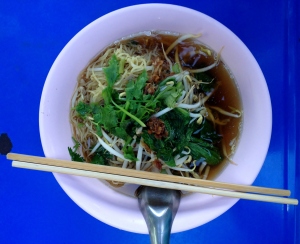 Noodles are a staple here.  This is Bat Mi Nam, which is basically just noodles with soup and veggies and spices and costs 60 cents.  This is another thing you can get just about anywhere, any time.  This is a photo of 4AM noodles.  There are LOTS of variations of how they prepare these.   I could probably eat a different variation every day for the whole year.  When I ask my students what they had for breakfast, it’s almost always noodles.  A lot of people have asked me about Pad Thai.  And that is actually the only thing I’ve eaten here that I didn’t really like.  Probably because they make it with dried shrimp which I’m not a huge fan of.  I hear that in the farang (white man) areas, you can get it with chicken like they do in the States, but I haven’t tried it yet.

Oh so painful, yet oh so delicious

Curry is another staple.  From least spicy to most spicy: yellow, green, red.  I have only ever had yellow.  Even the yellow is so spicy that it physically hurts my mouth but I just keep eating it.  I think I would die if I ever ate red.  Maybe I will try after I have had about 10 Chang beers to numb the pain.

You can also get pretty much any food to go, including soda, which they give to you in a plastic bag with a straw.  Like every other country in the world except America, they re-use glass bottles so they keep the bottle to get the deposit and you get a sack of Fanta.  Also, as I learned last weekend, do not try to pour hot curry out of a plastic bag into a bowl or you will burn your hands, swear a lot and make a huge mess.

Curry to go.  Hopefully not onto the floor next time.

On top of the staples of fruit, curry and noodles, there are a gajillion other kinds of street food.  Pancakes, fried chicken, sausages, balls of various meats, sticks of meat, omelettes, rices, ice cream, sushi, baked stuff (although they kind of suck at this), schwarma, alcohol and I’m sure there are many I am forgetting and many more that I just haven’t seen yet.

People have asked me what I miss.  There are a few really specific American foods that I miss (Lou’s?), but for the most part, I can get everything here.  Bangkok is a huge cosmopolitan city with a lot of ex-pats so Western food isn’t terribly hard to find, fast food and otherwise.

Hi So. Tuna tartar at a roof bar.

They have: McDonalds, KFC, Au Bon Pain, Dunkin’ Donuts, Pizza Hut, Carl’s Jr., DQ, Applebees, Baskin Robbins, Burger King, Starbucks and probably a bunch of others that I am forgetting, plus their own fast food chains.  Incidentally, KFC soft serve is amazing and only 10B (30 cents) for a cone.  There are also lots of really nice restaurants for the Hi So crowd.

Is the food clean/safe?  I think this is a relative term.  In America everything is SO sterile, and yet people still get sick.  If you’re eating street food, basically all of the ingredients are fresh, so you’re not getting all sorts of processed crap.  Fruits are the size that nature intended, you can name all of the ingredients in your dinner without using scientific words and you get clean chopsticks at all the food stands.  If you use common sense here, you’re generally OK.  Occasionally you’ll feel a little funky, but in my opinion, it’s worth it.

Despite all of this good food, things I will not eat: dried squid heads, turtles, large worm/snake/eel things, fish balls or insects.  I’m not trying to be Anthony Bourdain over here.