I have been seeing signs for a big monk gathering since my first day here.  Pretty much all I could decipher was that it was from 6-8AM, there would be 2600 of them, and it was on October 20th.  So I dragged my ass outta bed this morning after only getting 3 hours of sleep to see what this was all about.

Apparently the dress code for non-monks is white.  Whoops, missed that point, but that didn’t stop these staffers from wanting a photo with the farang.  So there I was, a giant whitey (I’m 5’6″ and these women are wearing heels and are still that much shorter than me), wearing the wrong color clothes and carrying a camera that doesn’t fit in my pocket.  Perfect disguise for them to believe I was a member of the foreign press.  I got into the photographer area, which gave me a wayyyy  better view of what was going on.  If sales taught me anything, it’s fake it til you make it, and that’s just what I did.

Ramen noodle for all.

Anyway, back to the point of the gathering.  I’m not 100% sure on this, but from what I can tell, monks gather food as like a charity thing.  Kind of how we buy the cheapest, most dented can of mystery meat/dog food at the grocery store and put it in the food donation box so that some lucky soul can eat it on Thanksgiving while we’re stuffing ourselves with human food.  The first part of the gathering is a Mass type thing.  People speak and the monks sit and listen and fall asleep, just like church.  I was kind of unsure of what this was all about, so after about an hour of speakers, I didn’t really know what was going on, and I was bored and hot (Bangkok is the hottest city in the world), but I knew that if I stayed til 8, then at least something would happen when the monks got up to leave. 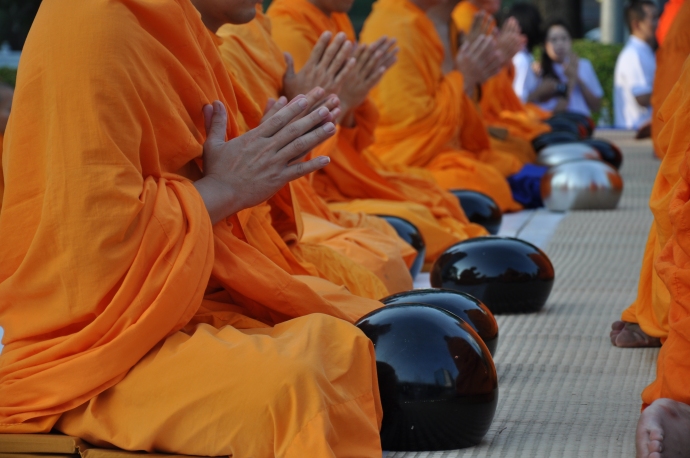 Monks and their spiritual orbs, aka upside down bowls

Then at about 8:00, the monks started chanting.  And wow, that was cool.  I  have no idea what they were chanting, but it was awesome and way better than those “peaceful sounds” CDs you buy at Walmart.

When they were done chanting, that’s when the real stuff started to happen.  They all had these things in their laps, and I was thinking to myself, ohhhh, I’m so smart, those must be some sort of spiritual orb symbolizing the circle of life and Buddhist reincarnation.  No, they are actually just bowls that were turned upside down.  The real press all started shuffling away toward the long aisle through the crowd, so I did the same.

People were sitting on the ground on a huge white plastic covering all along the aisle with big tupperware boxes of food.  The monks all stood and lined up, and started parading down the aisle, single file, and I was smack in the middle.  I didn’t notice, but all the press were men, which is probably because monks can not touch women, can’t brush past them, bump into them, nothing, and it was a pretty narrow aisle.  Once they started their march, some of the women along the aisle called me over and pulled me in to sit down next to them to offer food to the monks.  So I hopped right in there with them and started handing out packages of noodles, drinks, corn, all sorts of non-perishables from these womens’ boxes.  They just kept handing me more and saying “put, put”.  Again, as a woman, I can’t touch the monks, that’s why they have the bowls.  As each one walked by, we put food in their bowls and gave a little bow.  Then they emptied the bowls into big collection bags.

If I’d known, I would have brought a can of creamed Spinach without the label

Once the monk parade was over, the holy men hit the streets, and all the regular people gave them food.  Walking through the crowd on the way out was a little tricky cause the monks have big robes and it was hard to not be the stupid, giant American that bowls over some old man monk by accident.

1. Monks have the sweetest tats:

That radio is a direct line to Buddha

3. Monks probably hate cramming on to the bus just as much as the rest of us 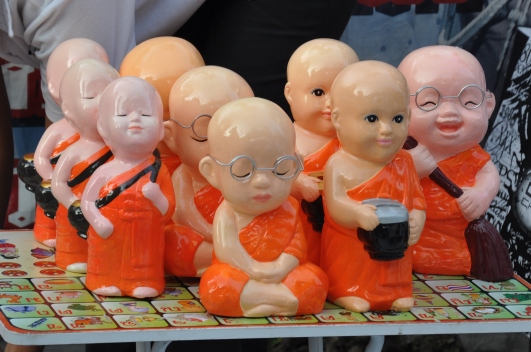 5. They have better uniforms 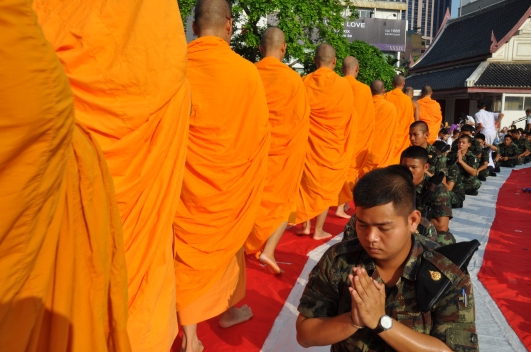 6. Sometimes a monk just gotta holla at his boys (note the sweet ink) 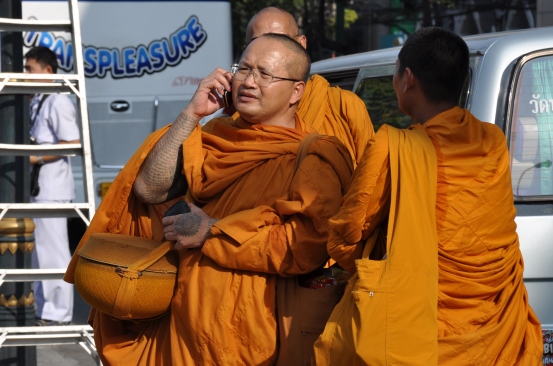 Yo what up bro?

I’m hoping that Buddha will enlighten me and help me find the way to an apartment….