Wait, it costs how much?

That’s right $16 USD for a pint of beer.  Just regular beer, not some special brew with magic spices in it.  Just a regular old beer.  Singapore is beyond any concept of what I thought expensive was.  A box of strawberries, $8 on sale, Orange Juice, $7, a LITER of gas, $18.

If I could eat at every stall, I would, except for the ones that only serve fish balls.

Besides the expense, Singapore is a really cool city.  It’s ultra modern, but you can still find pockets of traditional food at the hawker centers like Lau Pa Sat.  It’s like a big open air market with lots of little independently operated food stalls.  Kind of like a big food court of local Asian/Indian food surrounded by steel and glass bank skyscrapers.  Nom nom nom.

The various gardens are worth a trip to Singapore even if you aren’t into gardens.  I spent a day wandering around the Botanic Garden.  It’s immaculate and I have never seen so many beautiful flowers in my life.  There  are some critters wandering around too, turtles, water monitors, cool birds, and these things that look like the Asian version of an American squirrel…i.e. smaller and less fat, just like their human counterparts.  The National Orchid Garden was like Eden.  There were SO many orchids, but all sorts of other flowers too.  Thanks to my Miami ID, I got in for $1.  I am a student of plants.

The other gardens I went to were downtown and inside 2 big glass domes.  Wandering around in these gigantic terrariums, I couldn’t help but think that when we destroy the earth, at least I know that I’ll be able to go to Singapore and show my kids what plants used to look like. 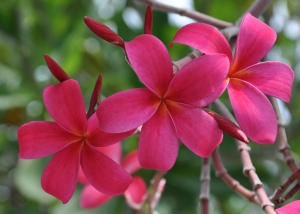 Some kind of tree flower 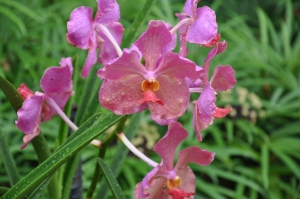 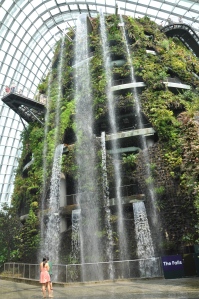 Flower from the Cannonball tree 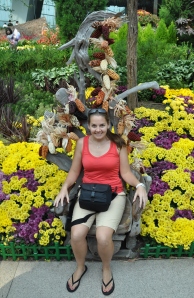 The bio-domes (formally known as Gardens by the Bay) also had some kind of American fall exhibit going on, which to Allison and me, was kind of hilarious.  There were cornucopias and pumpkins and scarecrows and, more importantly, an Indian corn throne which I had to sit in and take my rightful position as one of 2 Americans in that crazy dome.

And why have I never had a Singapore Sling before?  We went to the offensively colonial Raflles Hotel, (a guy dressed up like Punjab from Annie greeted us at the door) which is the birthplace  these delicious drinks.  Good thing they were $26, otherwise I would have definitely overserved myself.

Singapore is definitely worth a visit.  But be prepared to sweat like you never knew was possible and be reminded of how unclean, dated and smelly American cities are. 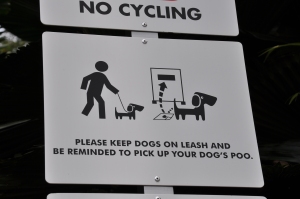